New polling on the cost-of-living crisis today reveals the extent of Scots’ fears about the coming hit to their family finances.

He calls on the UK and Scottish Governments respond to public demand by working together to support households through a coming storm which is set to hit every street in Scotland.

In a speech to supporters this evening he says: “What is needed is a plan that makes Britain work for the people of Scotland that starts by solving the cost of living crisis now and then in the years to come by employing all the resources of the UK to the benefit of Scotland.”

“Cooperation between Scotland and the UK – not confrontation or conflict between the two – is essential for the near-term recovery of Scotland and for the medium and long term prosperity of the Scottish people,” he says.

Mr Brown today highlights research which shows that, when energy price rises kick in at the start of next month, the estimated number of people in Scotland in fuel poverty will shoot up from 750,000 people to 1.2 million.

By October – when further increase are expected – that number could double to 2.5 million. The figures have been compiled by Emeritus Professor of Social Policy at York University Jonathan Bradshaw.

Mr Brown today reveals new polling by Our Scottish Future today as the campaign today publishes its ideas on how the UK and Scottish Governments can work together to provide support for households in the short term, and grow the economy over the longer time span.

On the cost of living, the poll reveals:

The report also sets out a series of short, medium and long-term measures that the UK and Scottish Governments can work on to ease the crisis, and then to grow the Scottish economy.

In the medium term, Our Scottish Future says that the UK and Scottish Government should together invest in modern housing technologies, better regulations over private landlords, and working with utility companies to protect those most in need.

In the long term, it says the UK Government should come in to beef up the Scottish Government’s underfunded and unfocussed 10 year economic transformation plan: investing to become an equal partner in the Scottish National Investment Bank, and working jointly to make Scotland an export superpower in Renewables, Life Sciences, Digital, and Manufacturing

Mr Brown will say today: “From April, when the new energy prices kick in, the number of people in fuel poverty will rise from 750,000 to 1.2 million overnight and it could even go much higher by October without compensatory action.”

“Neither the UK nor the Scottish Governments are doing enough. And what’s more they are not bothering to cooperate when together they should be making a sustained impact on poverty across our land.”

Mr Brown will add: “People prefer a plan for Scotland to deal with this crisis in which we mobilise all the resources of Britain.”

“In the short term, that means that we need to offer help with heating and living costs to give much needed relief to families – well beyond the insufficient offer made by UK and Scottish governments so far in that’s clear what should be done.”

“Firstly, we must link up with the Mayors in England, the First Minister in Wales and all sections of decent opinion in Scotland and Britain to demand a UK-wide change of policy on tax, benefit levels and heating help. One demand all could unite around is to restore the £20 a week Universal Credit uplift taken from six million families only a few months ago – worth £1000 a year. But the Scottish Government must also fundamentally change their own plan. They should at least double the money they have so far made available, directing the bulk of funds to the poorest and frailest who need it most. And they should offer enhanced winter protection for the near one million families in Scotland falling into fuel poverty this winter by giving them the heating help by guaranteeing total payment of at least £1000 more this year.”

“In the medium term, we need a plan to get heating bills down through bulk purchase of energy, the wider and faster deployment of the new cheaper solar and wind power, the shift of subsidy from on solar non wind and non wave projects to those that have best chance of cutting heating costs as well as cutting carbon usage.”

“This involves a better UK-wide energy procurement strategy and a UK wide policy for holding landlords responsible for better insulation in the privately owned accommodation in which today’s poor now live. Here again we need the power of the UK as a whole to bear down on unfairness and distribute resources where the need is greatest.”

“But in the longer term we need to build a stronger economy capable of growing without excessive inflation and the inevitable hit on living standards that rising inflation brings.”

“Since 2015 and until 2019 Scotland had lower annual growth rate than anywhere in mainland Britain despite spending far more than any other part of mainland Britain on industrial support. Growth was just 0.7% a year compared with 3% a year in London and 2.25% in the West Midlands and even 2% in North West. Only Northern Ireland with 0.5% growth did worse.”

“And that means that its best for Scotland to work with the rest of Britain and in cooperation to develop a credible medium and long term growth strategy that uses all the resources of the UK to the benefit of Scotland. To do so they could link up with the Mayors and the Welsh first Minister who are today jointly calling alongside me amend the changes coming in on April ”

Please see a copy of the presentation Mr Brown will give here.

See below fuel poverty figures with projected numbers of fuel poor households and individuals created on current trends as fuel prices increase (analysis by Emeritus Professor of Social Policy at York University Jonathan Bradshaw.) Fuel poverty is defined as when a household spends more than 10% of its income on heating. 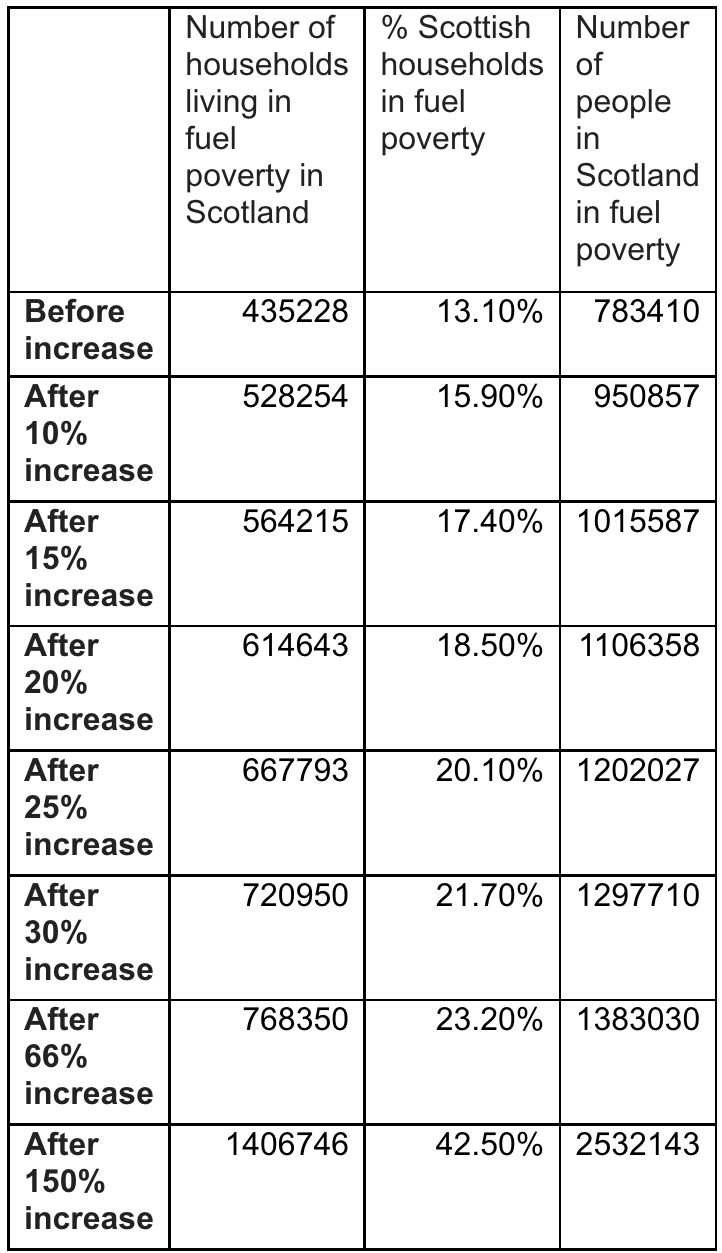 PrevPreviousResponse to the Scottish Government’s Plan for Economic Transformation
NextThe Debate Isn’t About Indyref2, It’s About How To Improve Britain. Will The SNP Join In?Next