Last week, we released the results of our ‘Morning After Poll’, detailing our view of what Scotland voted for and why.  We tried pretty hard to be neutral in our tone, and give each party and side of the constitutional debate a bit of food for thought before making any big claims about what people voted for.

One interesting fact that caught us when we looked through the detailed poll findings was that after all of the pre-election conversation of Alex Salmond’s gambit for SNP List votes, the party that had the most benefitted from SNP switching was the Scottish Greens, who won over 6x the number of SNP constituency votes on the list as the Alba party, with half of their voters saying ‘I voted to elect as many pro-Independence MSPs as possible’ (not ‘I voted for the party I most wanted to win seats’)

Whilst interesting, this was not particularly surprising. We have no particular knowledge of SNP or Green campaign strategy, but it seemed fairly clear during the debates that Nicola Sturgeon and Patrick Harvie were enjoying at least some sort of unspoken mutual non-aggression pact that led to the near-absurd end-point of Nicola Sturgeon’s kindergarten teacher-style ‘interrogation’ of Patrick Harvie  in the STV debate (‘so what you’re saying Patrick is that there is no way to build the Scotland you want without Independence?).

Indeed, perhaps the most surprised person in Scotland about these findings is Patrick Harvie, whose intemperate pool quote on the issue ended ‘it makes no sense at all to highlight some SNP voters who aren’t convinced about independence, but then pretend without a shred of evidence that every Green voter is voting tactically on the constitution alone’. Leaving aside the logical and evidential flaw in his argument (it’s half of his vote, not all of them),  we thought it worth showing some more shreds of evidence beyond the report we published, in case he is interested in learning about why people vote for his party in Scotland.

Before we go into detail we should be clear – with only 80 Green voters in our poll (c.50 on a weighted basis), some of the cross-cuts we refer to here are low n, but hopefully show enough evidence volume of evidence for those declaiming the political purity of their vote to at least countenance that the Greens benefitted from some SNP/Pro-Indy voters lending them a hand up the D’Hondt ladder.

The Background: The Greens are a party with very little ‘core’ support

As was published in our report on Thursday, we asked voters the day after the election the question ‘In this election which party did you want to win the most seats’.  We thought this would be the best way of working out what the ‘true desire’ of Scottish voters was, excluding tactical voting or use of the list as a ‘second preference.  The results aligned fairly well against the actual regional vote share of all the parties, other than the Greens. 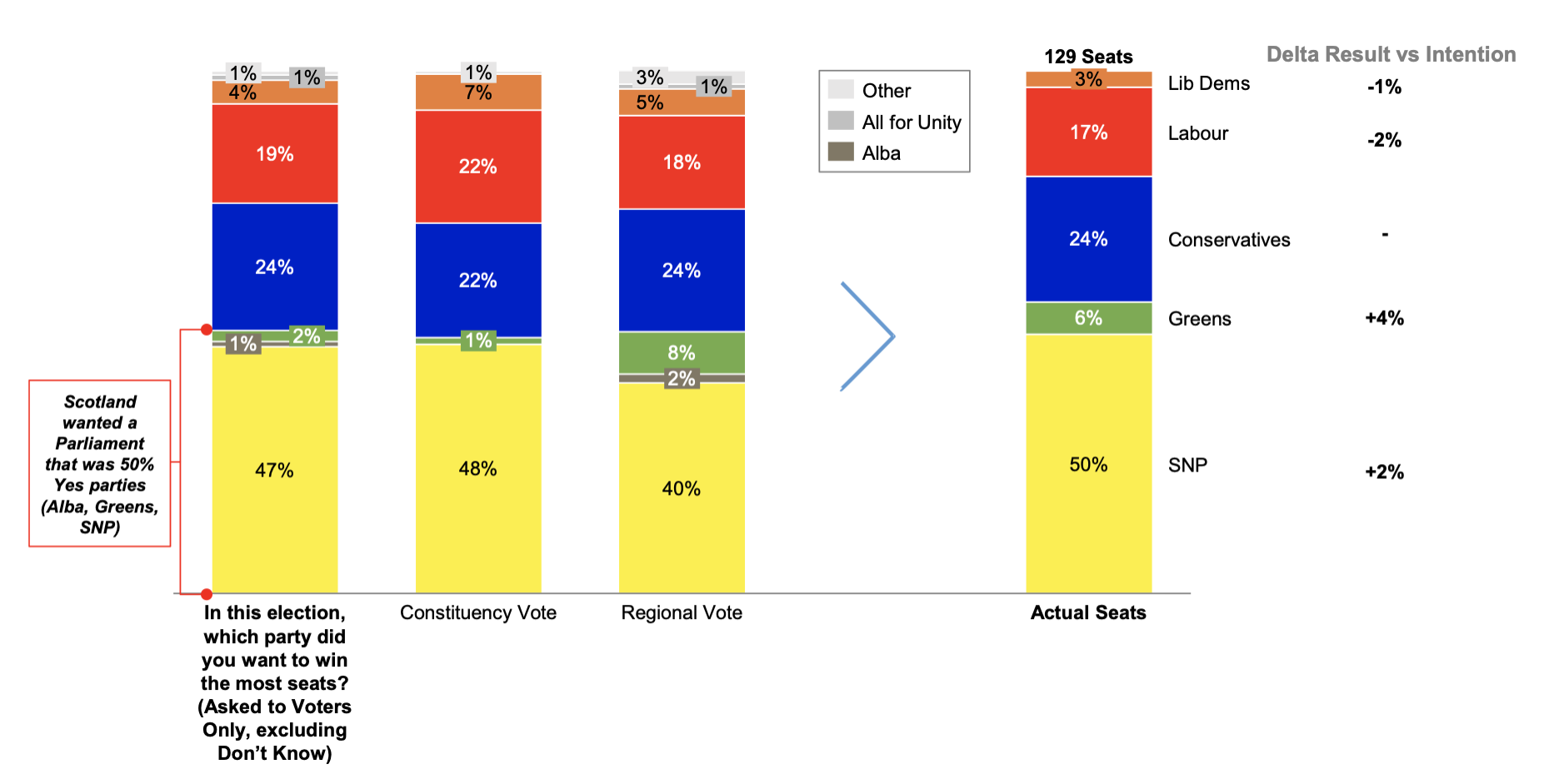 The implication of this is fairly clear – whilst the Greens clearly have a good brand and people who like them there are very few people in Scotland who wake up in the morning defining themselves as a ‘Scottish Green’ politically.

The Evidence for Tactical Voting

In our analysis we stated that around 50% of the Scottish Greens’ vote was tactical in order to maximize Yes MSPs.  This was a result of the response to the question Which of the following was most important in your voting decision at this election for your peach regional list vote?, where around half indicated that they just wanted to elect as many Pro-Indy MSPs as possible (a number that grows for SNP to Green switchers) 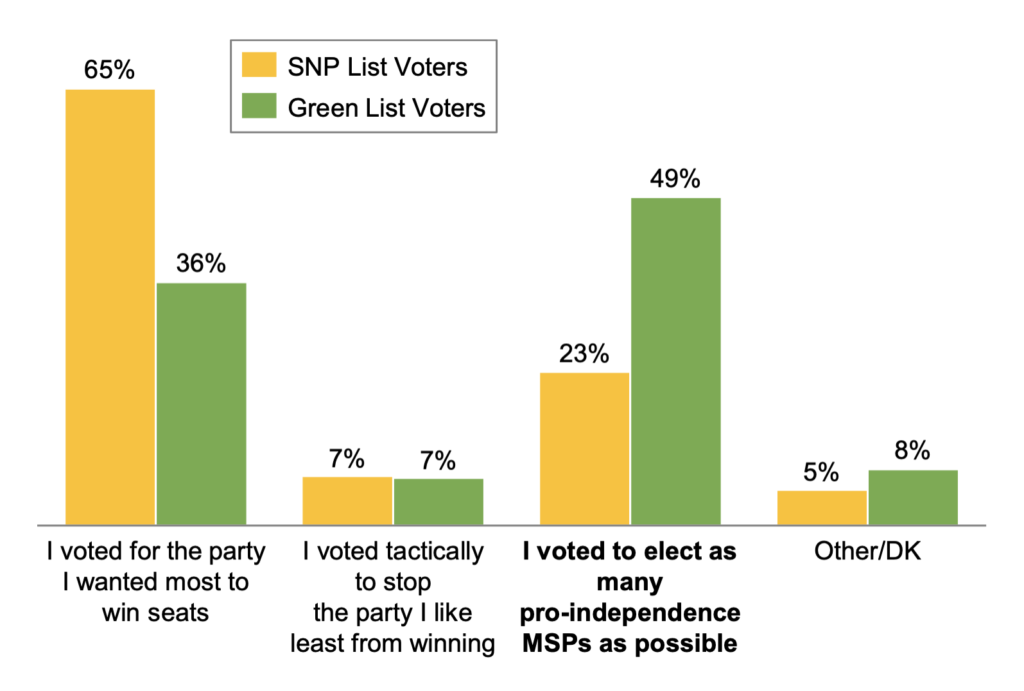 Uncovering the true intentions behind people’s voting patterns is notoriously difficult to do, not least because of how people post-rationalise their behaviour.  However, we have a number of triangulating points that imply that a substantial proportion of the Green vote on the list was from SNP supporters who are strongly in favour of Independence

The Implications of Tactical Voting

With the assumption that c.50% of Scottish Green votes were tactical votes lent by SNP voters, a Scottish Green vote of 4% (vs the 8%) and an SNP vote of 44% (vs 40%) would have had the following implications for the Scottish Greens at a regional list level, losing 6 of their 8 seats, giving 2 seats (and a majority) to the SNP, 3 seats to Labour and a seat to the Tories

For the leadership team of Patrick Harvie and Lorna Slater, there is a happy coincidence between their position on independence and their own self-interest as politicians seeking election. The Green cake was baked with pro-independence ingredients – and the party cannot protest when people wish to point out that they are eating it. The question it leaves hanging is who in Scotland is best able to represent environmentalists who do not view Scotland’s constitutional question as among the most pressing issues around climate change.